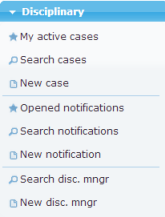 A disciplinary case is always carried out within an organization, in most cases, within a national federation, but sometimes is it also possible that a regional association manages it. The disciplinary administrator is in charge of the process, based on the hierarchical principal. Based on the case, the decision is being made if the offender will be sanctioned or not. In accordance with the FIFA regulations, there are various types of sanctions, e.g., fines, return of rewards, suspensions for a certain number of matches, etc. The sanctions in COMET are exactly the same as the FIFA sanctions. The player that received a red card is sent off from the field and he is automatically suspended from the next match. For every person that receives a red card, once the match is "CLOSED", (a status is set to "PLAYED"), COMET automatically inserts a new disciplinary case and adds an active sanction "Suspension for a certain number of matches" and a number of matches is set to one (or to as many as the Association rules require). In most cases, no other additional action is required. While the player has an active sanction, he will be marked in red for the next match. When the sanction expires, he will appear on the list the same way as the other players. If for any reason, the player received some additional sanction, or he was suspended for more matches, and not just one, the user with appropriate roles and permit ions has to search for his disciplinary case and change the value of the existing sanction or add new sanctions.

To activate a new disciplinary case click the menu item "New case" and the form for entering new case will open. Complete all mandatory fields (marked in red): select offender type (player, referee, delegate, etc.), then organization and competition, date and match and a person (or any other entity) that has committed a foul. On the right side of the screen there is a field for entering paragraph that explains sanctions for certain fouls. After that, enter a date of a decision and describe a foul in a text-box. 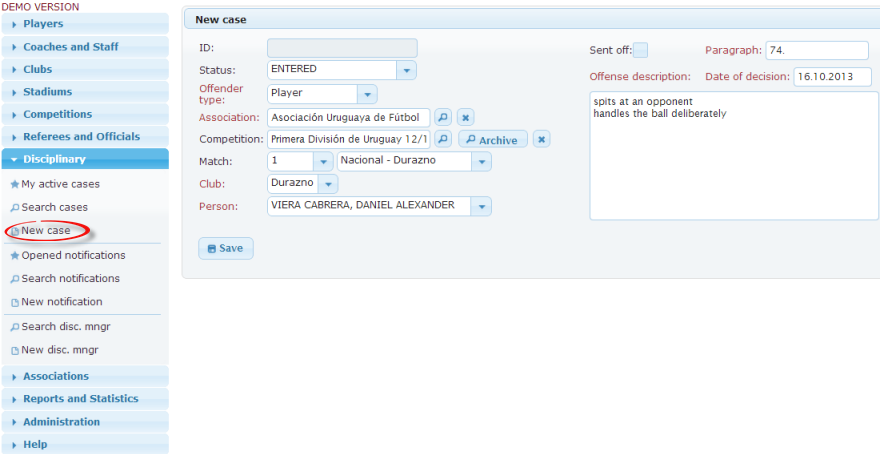 Once you have entered all mandatory data and pressed the "Save" button, a new case is stored in the system, the status is automatically set to "ENTERED" and a system generates a COMET ID. You can still search, select and modify a case by clicking the "Search cases" item. After that, the list of all cases will open. Select a case to open its details. If necessary, they can be changed. On the same screen there is an "Add sanction" tab. Click on it to open a window on which you can select a sanction type that varies according to the offender type. Applicable sanctions are not exactly the same for persons and for organizations. It is possible to obtain more than one sanction for one foul.

After you click the "Save" button, selected sanctions are stored in the system and they become visible on the list of sanctions of a certain disciplinary case (in status ENTERED) and a sanction status is set to ACTIVE. 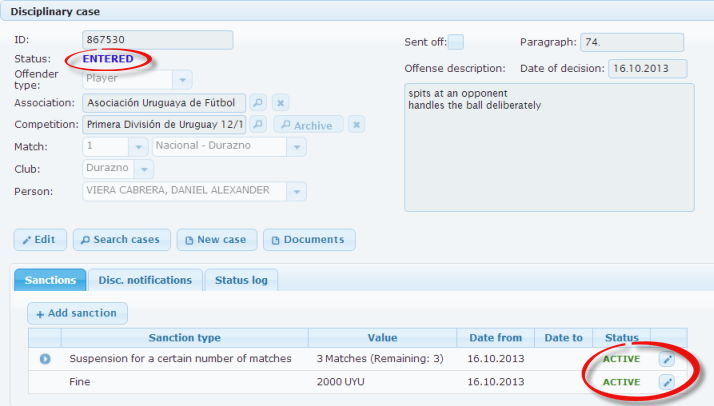 Insert matches on which the suspension was served

If a player gets suspended for certain number of matches, as we explained previously, the sanction needs to be changed (added) manually. It is also possible to enter matches on which the suspension was served. In order to do so, open the sanction details (see image below), and press the "add" button to add the matches.

Only played matches can be added and the sanctioned player can not appear in the line-up. 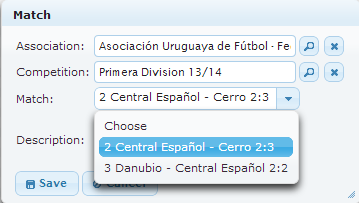 After adding matches, they appear on the list, and a number of remaining matches is set to 0. If you need to insert a match that is not in the COMET system, you can insert a description into the description box, instead of selecting a match from the drop-down list.

It is extremely important to change the sanction status once there are no matches remaining, because while the sanction is ACTIVE the player wont be able to play. He will stay marked in red. In order to do so, click the pencil item on the right of the sanction, then the "EDIT" button and finally the check-mark to close the sanction. If offender gets suspended for certain number of matches or for a certain period of time, he will be marked in red and wont be able to play until all of these matches are played or till the restriction period comes to its end. This data is also very important for the Competition Module.

Delete disciplinary case from the match in status "PLAYED" Press the delete button on the warning message in order to complete the desired action. Once the disciplinary case is in the status "DELETED" it will be possible to eliminate a red card from the match.

You can access your active cases by clicking the menu item "My active cases". The list of all of your cases in the status "ENTERED" will open. 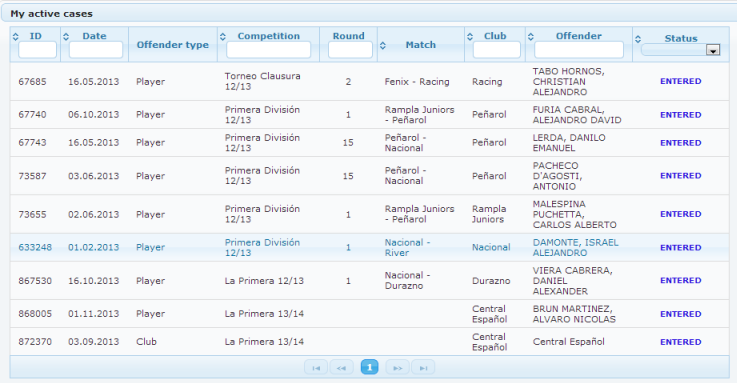 As if it was mentioned previously, a red card automatically starts a disciplinary case, that prevents a player from playing. When the "red card" event is inserted on the player, it is immediately visible on the line-up table (See image below). 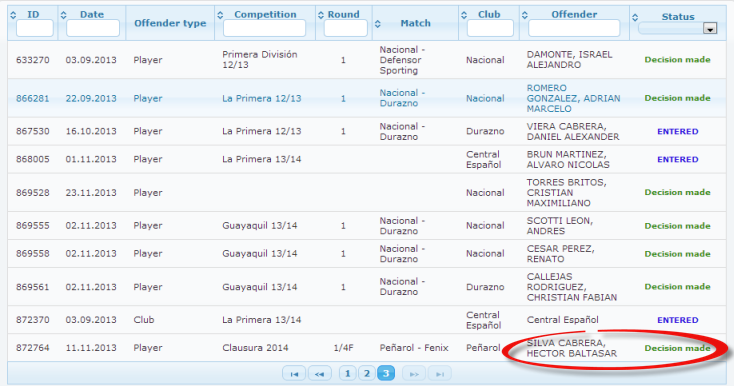 In case the player has to serve more than one match, the sanctions need to be inserted through the Disciplinary Module. In order to do so, select the case from the search list to insert additional sanctions into the system. The procedure of entering new sanctions is done the same way, as it was described previously. The procedure of changing statuses was previously described as well. Select the sanction, press the "Edit" button then change the "ENTERED" status to "CLOSED" or to "CANCELED".

On a player form, and also on a club form there is the "Sanctions" tab on which you can open all the sanctions that were assigned to a player or to a club. Select the desired sanction in order to open all the respective details.

If necessary, you can proceed working on sanctions, making any necessary change the way it was previously described in this Chapter. In case of clubs, the process is the same. Search for the club and press the "Sanctions" tab to open all the club sanctions. 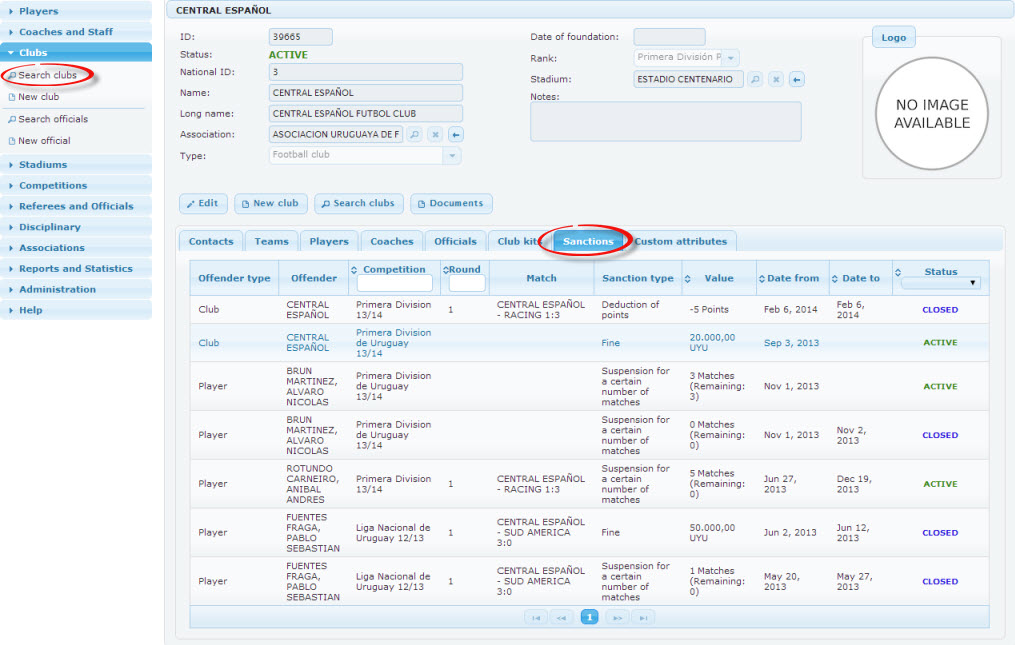 Suspension scope and serving scope can be overridden with competition setting. Fields for selecting scopes are located in "Disciplinary" section of the competition's screen. 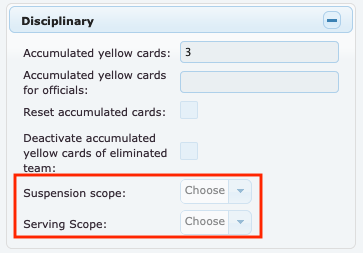 Setting scope to new sanction based on settings in competition, default sanctions or properties file

The system will set the suspension scope and serving scope based on settings in this sequence:

Lastly, one should keep in mind there is an option "Only players in catalogue serve suspension" under "Disciplinary" section on competition's main screen which, if set, will allow serving of suspension only if player was registered for the competition (added to the list of players on "Clubs" tab of the competition).

As it was explained previously in this chapter, a disciplinary case can be opened against each entity in COMET. For example, it can be opened against referees, coaches, clubs, but most frequently players. In addition to receiving suspensions for some number of matches or suspensions for a period of time, it is very common for Clubs or Players or Team officials to be sanctioned with a monetary Fine. In accordance with the league competition rules and association disciplinary code, for each played match and round (after the referee makes it official by changing the status of the match), Comet can be configured in a way to automatically provide the following:

Furthermore, COMET can be configured to keep track of the payment status of these fines and even to prevent persons from participating in matches when the fines have not been paid. If your association is using COMET for this purpose, a special console called „Monetary sanctions“ can assist users in tracking the status of all sanctions of type „Fine“.

If you have the required permissions in the system, you can access the menu option “Monetary sanctions“ listed in the „Disciplinary“ module.

In order to narrow down the selection, the list of active sanctions allows you to search by dates, as well as to filter the list by any of the data table columns. If you would like to obtain the sanctions for a certain period of time, the System allows you to specify a range of dates (based on the date of the Disciplinary Case) and press the „Search“ button (see Image below). The list will display only the sanctions which match your criteria.

The System allows you to close one or more monetary sanctions using the “Monetary sanctions“ console. One typical scenario for using this feature would be when a Club submits a payment to the association for some amount in order to cover one or more unpaid monetary sanctions issued to the club or its players or staff. In such a case, instead of manually opening one case at a time and closing one sanction at a time, the console allows the user to do it „in bulk“. In order to close sanction(s), check all the checkboxes next to the sanctions you want to close, and then press the “Close sanctions“ button at the bottom of the screen. 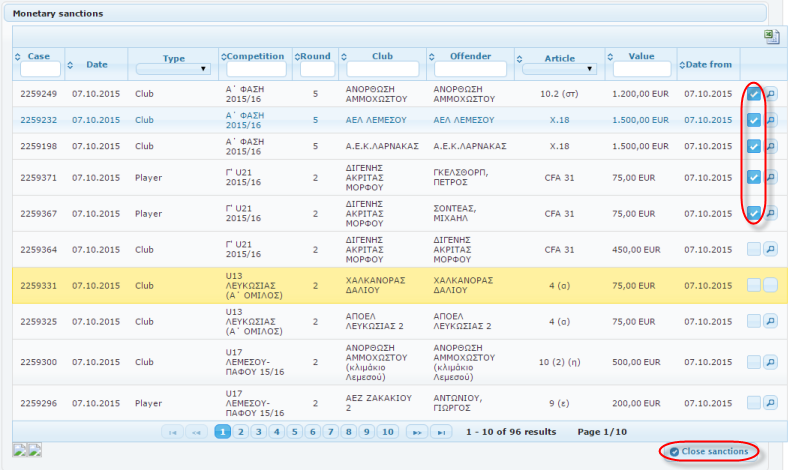 The window for closing sanctions opens immediately. Complete the mandatory field “Date to“ and add a note (if required) and then press the “Close“ button. 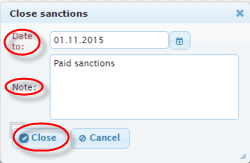 After completing described action, the selected sanctions will no longer appear on the list of active monetary sanctions.

If the option "Disciplinary committee intervention" is checked, upon changing match status to PLAYED, the disciplinary notification will be automatically created with match summary text (and incidents of both match clubs) copied into description of the new notification. 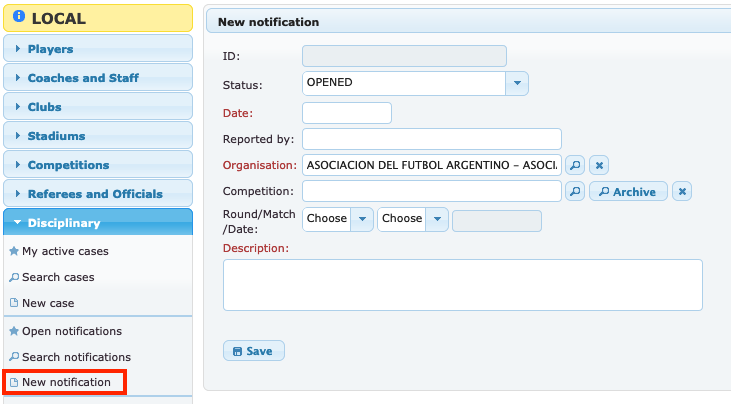 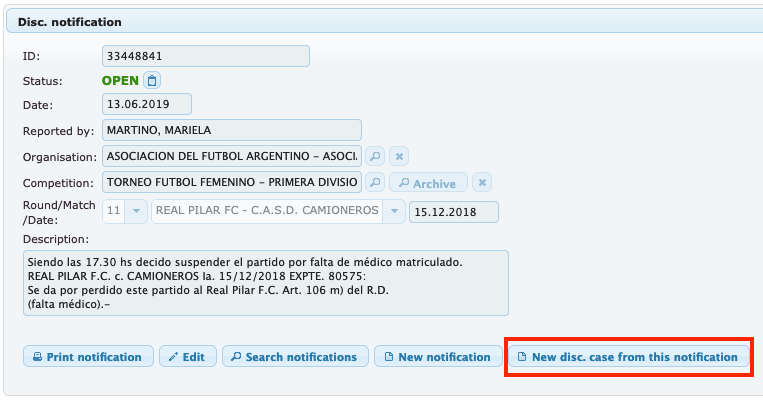 Most of the fields in disciplinary case will be automatically filled based on values of disciplinary notification. 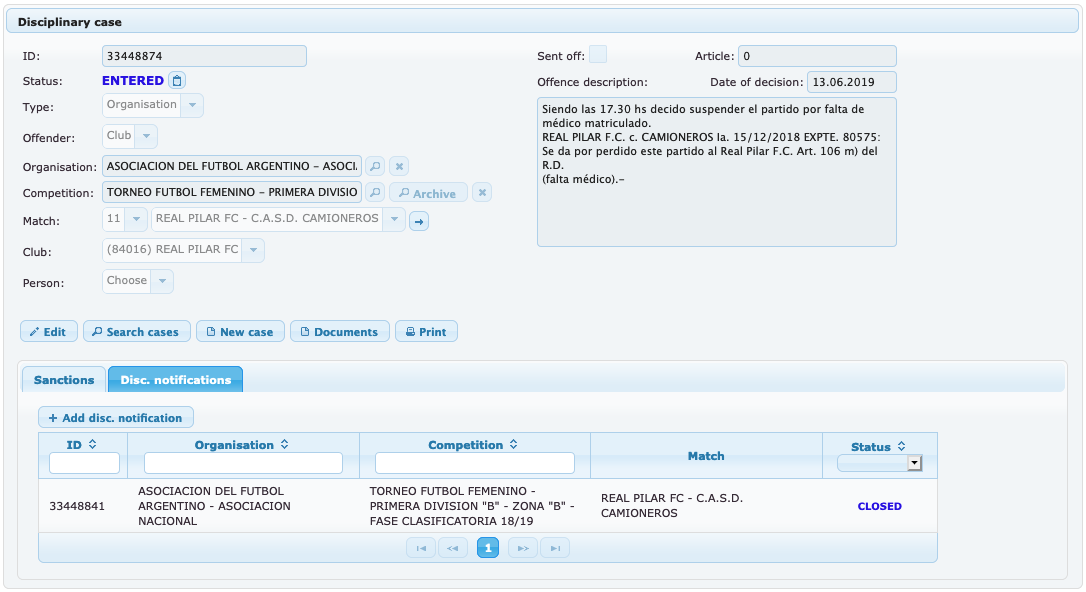